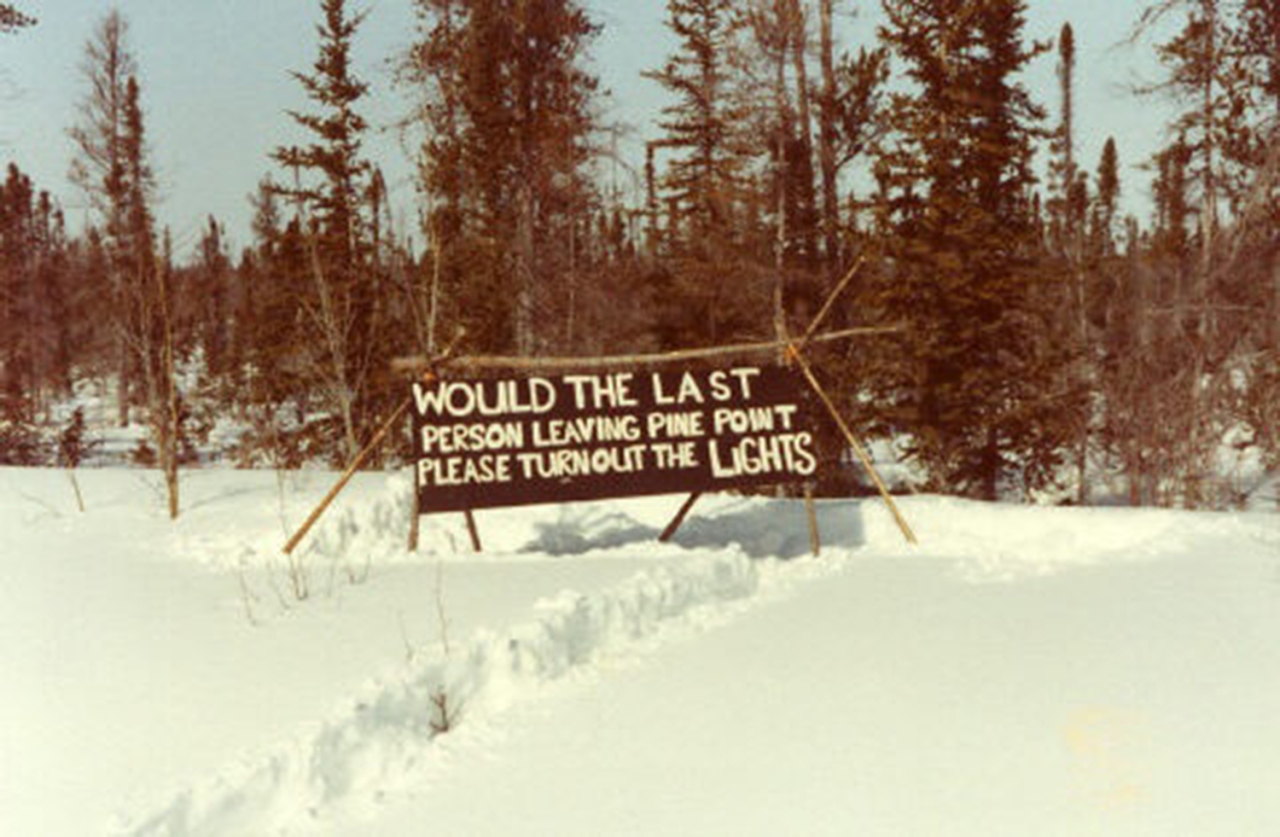 Exploring the Jackman Humanities Institute’s (JHI) 2015–2016 research theme of Things that Matter, the exhibition Talking Back, Otherwise considers what things—objects imbued with social relations—can tell us about society and history when they operate counter to our expectations, elongating the contemplative space between appearance and performance.

The JHI is a humanities research centre that emphasizes the value of collaborative scholarship across academic boundaries. Each year, the Institute sets a research focus and invites scholars to pursue projects related to this central theme, and for the last five years the JHI has also invited a curator to make an exhibition in their research space. The humanities help us to understand the diversity and complexity of our world and therefore shape the way we engage with others, near and far, within kinship circles and across difference. Artworks can capture these strategies in material form, and they can expand upon these proposals—taking liberty with the creativity that characterizes artistic methods—to advocate for new ways, more accountable ways, of being in relation.

So then, imagine the wonder a mundane object can generate when it becomes the symbol of a great love affair. Or the transformation of a simple lump of matter into a glamorous commodity. Or the capacity for an image of injustice to instigate activism. In shifting perceptions of value, the object-world exceeds preconceived determinations of utility or meaning. The thing speaks. And it does so by talking back to us, by provoking our ire, desire or surprise.

The shift between what an object physically is and what it evokes emotionally or intellectually is an unruly reminder of how people and matter are entwined. Through this relation, the thing doesn’t unbecome its appearance, but becomes more than. Not necessarily a function of the object itself but a register of the subject’s engagement with it, this excess is a product of reciprocal entanglement: the subject looking and the object looked upon write each other in turn. The provocations offered in Talking Back, Otherwise raise a chorus of explanatory ruptures. These works talk back (rather than just talking) because they operate at the edges of systems of classification that functionally yet inadequately serve to contextualize them.

What kind of speech can objects produce? In Talking Back, Otherwise, the collected artworks invoke what Ashon Crawley calls “Otherwise” in his essay “Otherwise, Ferguson”:

To begin with the otherwise as word, as concept, is to presume that whatever we have is not all that is possible. Otherwise. It is a concept of internal difference, internal multiplicity. The otherwise is the disbelief in what is current and a movement towards, and an affirmation of, imagining other modes of social organization, other ways for us to be with each other. Otherwise as plentitude. Otherwise is the enunciation and concept of irreducible possibility, irreducible capacity, to create change, to be something else, to explore, to imagine, to live fully, freely, vibrantly. [1]

In the oscillation between one way of understanding and another, in the interruption that points both to an explanatory paradigm and its limits, a critique of the normative world is made possible. By turns playful and serious, the works in this exhibition utilize shifting perceptions of value to comment on the strictures of systems of classification—poking holes, making fun, resisting. Because aesthetic practices need not adhere to the logic of the world as it is, strange visions can emerge, images of what might be possible if the organizing structures of the world were Otherwise. Within this exhibition there is a sense of what these Otherwise possibilities are made from and what they might lead to.

In the definition of “purity,” the erasure of “white.”

Scalawag (n): 1) a worthless person; rascal. 2) A Southern _____ who became a Republican during the Reconstruction period: a contemptuous term. 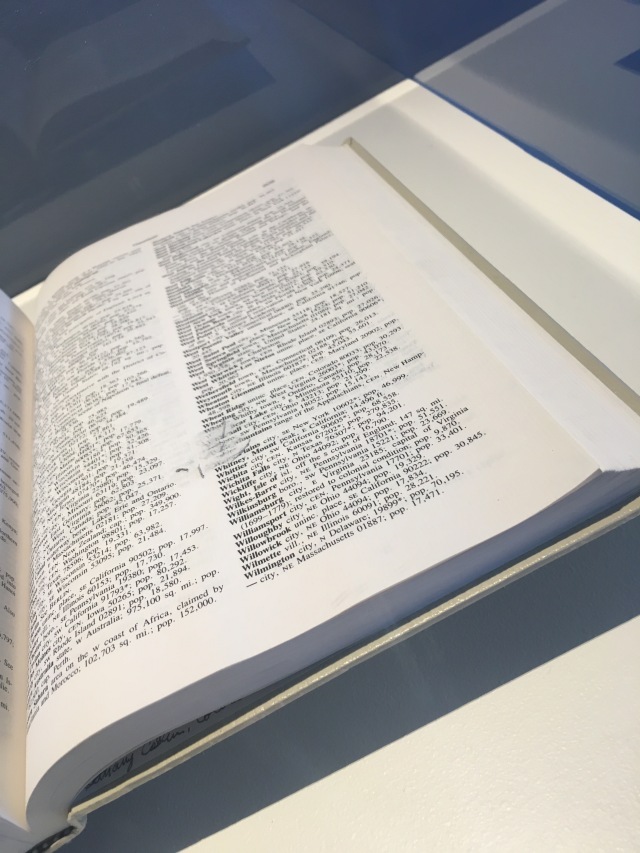 A study in what remains when “white” is removed from the naming of places.

Currently on display, “light” through to “limp,” and evidence of how “white” has been tied up with the definition of all kinds of lilies.

In their first episode of the new year, Terence Dick thinks through Talking Back, Otherwise for akimboTV: “Idea-based art is re-materialized in this group exhibition found high above the University of Toronto. Underlying the social and political narratives explored by the artists is a concern with the ethics of reciprocity played out in the possibility of conversing with the world of objects.” Visit Akimbo and watch the review here.

It is an enormous honour to announce that Talking Back, Otherwise has been selected by Karina Irvine as one of the top 3 exhibitions of 2015. Keeping some very good company on the list (with Tiziana LaMelia’s The Eyelash and the Monochrome at Toronto’s Mercer Union and Kim Boem‘s self-titled solo exhibition at Vancouver’s Contemporary Art Gallery), Irvine organizes her list around the idea of “Telling Things.” Of Talking Back, Otherwise, she observes that the exhibition “explores the JHI’s annual theme…through asserting the evocative life of things. The boundaries between our past, present and future are questioned within the show by shifting and challenging perceptions of historical and societal narratives. In effect, the artworks actively present alternative modes of comprehending place, reality, identity and meaning-making by talking back. Their configuration, while blending into the institutional framework of the JHI, lends an expansive and refreshing voice to the diversity and complexities of our world.”

The Jackman Humanities Institute will be closed for the holidays from 23 December 2015 until 04 January 2016 (inclusive).

Looking forward to more thinking and talking about how things matter in the new year.

Currently resting on pages displaying “Bk” through to “bleak.” 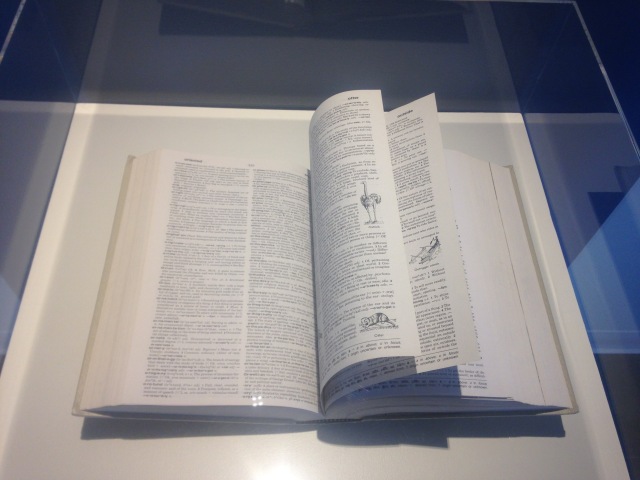 Ashon Crawley, whose articulation of the otherwise has been pivotal in the development of Talking Back, Otherwise, will be visiting Toronto this week. Please join him at Gallery TPW on Friday night to engage him in a discussion about the capacity of the otherwise to inform social justice movements, music, dance, and artistic and curatorial methodolgoies.

How does otherwise feel? And what does it mean to feel otherwise?

Ashon Crawley is Assistant Professor of Ethnic Studies at University of California, Riverside. His research and teaching experiences are wide-ranging: from Black Studies to Performance Theory and Sound Studies to Philosophy and Theology to Black Feminist and Queer theories. He recently completed his first book project, Blackpentecostal Breath: The Aesthetics of Possibility, an investigation into black queer aesthetics and performance as modes of collective/social imaginings otherwise.

At Gallery TPW, Crawley will present Feeling Otherwise, a talk and participatory conversation that expands upon his multi-year project elaborating the concept of otherwise possibilities.

The otherwise, as Crawley conceptualizes it, engages the normative world as a deformational force. Mapping the ways that feeling otherwise is connected to the ongoing projects of settler colonialism and racialized capitalist logics, Crawley explores how feeling and being otherwise can function as a critical analytics. Departing from the Blackpentecostal faith he was raised with, Crawley investigates how the music, the sound and the feeling of Blackpentecostal lifeworlds make such otherwise possibilities perceptible to audiovisual experience. Yet, this is but one, and certainly not the only context where the otherwise can be registered. Such feelings, such otherwise possibilities, are plural, queer, black.

Feeling Otherwise will experiment with beginnings and endings, the fictive and the real, the sonic and the haptic, inviting a translation of the otherwise through artistic and curatorial methods in the participatory discussion to follow.

The following are links to Crawley’s writing that engages the idea of the otherwise:

Against Water Shutoffs and Occupation
Do It For the Vine
That There Might Be Queer Sound
Otherwise, Ferguson
Between 4’52”
Otherwise Movements
Against the Normative World
Wednesday Night Prayer Meeting

Talking Back, Otherwise
Create a free website or blog at WordPress.com.